Exploring Deep Space: To the Moon, Mars, and Beyond

“Studying whether there’s life on Mars or studying how the universe began, there’s something magical about pushing back the frontiers of knowledge. That’s something that is almost part of being human, and I’m certain that will continue.”

Since the end of the Apollo program, though, no human spaceflights have been beyond low earth orbit (LEO). The area past LEO is considered “deep space”— the vast, unexplored region of space that extends beyond our Moon, to Mars, and across our solar system. It’s in deep space where famous science fiction novels and movies, such as The Martian, have taken place. And its deep space where future generations will strive to expand humanity’s footprint.

Earth to Moon, Moon to Mars

The late Sally Ride was certain that mankind would continue to push “the frontiers of knowledge,” and she was right. The Artemis missions, an ambitious NASA earth to Moon, Moon to Mars plan, is a testament to this. While the Artemis space missions are mainly focused on lunar exploration, NASA's long-term goals are even more enterprising from a deep space perspective. Using the technology and research developed during the Artemis spaceflights, NASA intends to launch a future crewed mission to Mars. This daring NASA Moon to Mars deep space plan involves building a new space station in lunar orbit and, eventually, a habitable Moon base.

Understanding the future of Artemis is to understand the future of deep space exploration. There are five stages of the Artemis missions:

The Journey to Mars

In 2021, NASA landed the Perseverance rover on Mars. Its mission is to seek signs of life, and collect rocks and soil samples. Subsequent NASA missions would send a spacecraft to Mars to collect these sealed samples from the surface and return them to Earth for in-depth analysis. The Mars 2020 Perseverance mission is part of NASA’s Moon to Mars exploration approach, which includes the previously mentioned Artemis missions to the Moon that will help prepare for the first human exploration mission to the Red Planet, which is estimated to happen in the 2030s.

At the Johnson Space Center and other NASA Centers, high level mission objectives for future human Mars missions are translated into specific surface systems and concepts of operations. NASA, for example, has embarked on an approach that will allow human crews to live and work productively on Mars for extended periods of time and gradually become independent of support from Earth. This requires not only an understanding of the Mars mission requirements but also constraints imposed by the Martian environment and the “known unknowns” that must be investigated and incorporated into an overall approach to pioneering on the surface of Mars.

According to NASA, mission success through all stages of the journey to Mars relies on the integration of science and engineering into all aspects of human exploration. Mission relevant environments are key to testing a wide range of technologies, tools, and techniques in addition to training the astronaut and ground operations crews in immersive environments.

Many companies that aren’t household names play a hand in helping mankind push the boundaries of space. Spartronics, a contract manufacturer of deep space solutions with IPC-J-STD-001GS Space Addendum certification, has collaborated with their customer Aerojet Rocketdyne to manufacture a component within the Orion space craft.

“It’s exciting to play a part in the Artemis missions with our work on the Orion MPCV,” said Program Manager, Jeff Kooyman. “Ultimately, with Artemis 2-5, we’re proud to be doing our part that takes a big leap into learning more about deep space exploration. Our team is helping make the science fiction of deep space exploration become a reality.” 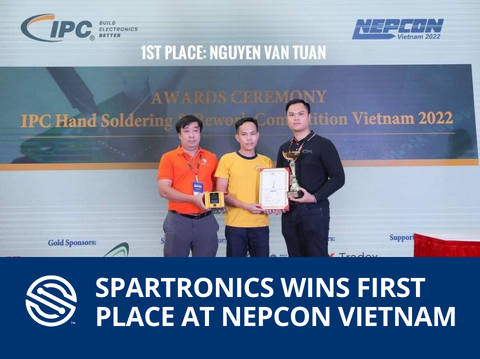